Our missions is to service and sell quality made furniture, appliances, and electronics at affordable prices. As a locally owned and operated business, we also feel it is our responsiblity to give back to the community that has given so much to our family over the years by supporting many local schools, churches and community center programs. We take great pride in our partnership with Habitat For Humanity and share in the idea that together we can make a difference. 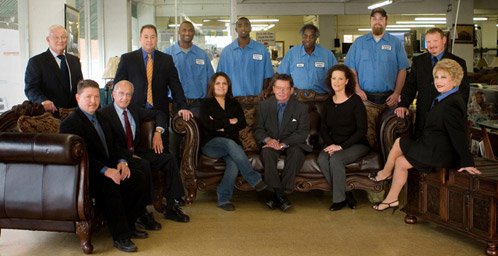 The year was 1900 and Sam Kirkpatrick has just opened Waco's first furniture store. In 1905, G.C. Witt and Connie Jones started Wott & Jones, Waco's second furniture store. These stores survived the great depression and the Waco tornado. Even though the tornado destroyed both buildings and all the merchandise. Both stores rebuilt in the old Waco Square, but in the 60s urban renewal required the demolition of those buildings.

Later in the 60s, R.A. Witt then owner of G.C. Witt & Sons Furniture purchased Kirkpatrick's store and combined the two names and consolidated the companies along with their huge customer bases. In 1986, Cleveland Witt and Robert Goldsmith as partners purchased the cooperation. In 2000, Mike Goldsmith, Troy Goldsmith, and Lee Bauman became partners in Kirckpatrick and Witt. In the early 1970s, Connie Whited became one of Waco's most recognizeable faces and vocies of TV and radio as the sales force behind Kirkpatrick and Witt Furniture, Today after 30 years of dedicationm she is still going strong. Connie invites all of her past customers as well as new customers to stop by for a visit.